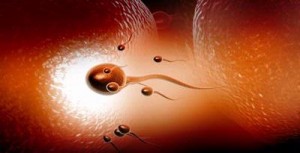 How important sperm functions in the process of pregnancy. Therefore, abnormalities in sperm may lead to disruption of male reproductive function. Most cases occur in men are:

The semen is sperm count is what determines the success of obtaining offspring. Normal, spermatozoanya number about 20 million / ml. In men who are less cases of sperm (oligozoospermia) or even not found in sperm cells at all (azoospermia).

With the exception of the sperm in the semen is other substances from glands of male reproduction. Substances that serves food supply and maintain the quality of sperm that can survive until it snaps into the female reproductive tract.

normal sperm is shaped like a tadpole. Consists of the head, body and tail. Abnormalities such as small head and a tail as not to affect sperm motility. Of course, this complicates the sperm reaching the egg.

To reach the egg, sperm must be able to make the long journey. Was a factor in conception. Sperm numbers are sufficient, if not accompanied by a normal movement, so that the sperm reaching the egg. In contrast, although few in number, but quick movements, you can reach the egg.

The case of weak sperm motility (asthenozoospermia) is often. Sometimes, even the dead sperm (necrozoospermia). The movement of sperm is divided into four categories:
a. Move rapidly and directly
b. Slow and difficult to move forward
c. Not moving forward (moving in place)
d. Not moving.

normal sperm separated from each other and move according to each direction. In particular, clusters, abnormal sperm, bind to each other, and still. “The situation is said to agglutination,” said Tri Bowo. The agglutination may occur due to an immune disorder in which an egg sperm refused.

Semen is very thick, resulting in sperm cells is difficult to move. Fertilization was so difficult, because the sperm can not reach the egg. In normal cases, during ejaculation, the semen in the form of a thick melting (liquefaction) between 15-60 minutes.

At ejaculation, sperm from the testicles to the penis through a very fine line. If the channels were blocked, sperm can not leave. This is usually caused by trauma in the collision. You can also by a lack of genital hygiene to enrich the lives of the virus or bacteria.

Testicle may be damaged by viruses and other infections such as mumps, gonorrhea, syphilis, and so on. To note, the testes are sperm factories. Therefore, health should be maintained. You see, a healthy testicle produce both sperm quality and quantity.

The testicles are very sensitive. It was easy to be influenced by external factors. If the testicle is cut off sperm production can be interrupted. Maybe when exposed, was left out of the sperm. It’s just no sperm (azoospermia).