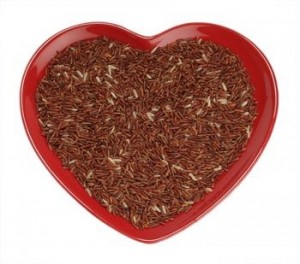 Specialist heart and blood vessels Hospital Sahirman Sahid Jakarta, dr. Aulia Sani said, red yeast rice is used to inhibit the production of cholesterol in the liver and prevents thickening of plaque in the blood vessels and prevent blockage of vessels.

“Inhibition of cholesterol production in the liver directly to lower total cholesterol quickly,” Aulia said in a press conference in Jakarta, Monday (18/06/2013) then.

Red yeast rice is known to reduce cholesterol in the liver. Report drug sites, red yeast rice contains lovastatin active compounds that affect to improve blood lipid levels that are too high (hyperlipidemia). In addition, there is also evidence indicating that the compound has antibacterial and anti-cancer.

Red yeast rice also contains sterols such as beta-sitosterol and campesterol, which can block the absorption of cholesterol in the intestine. In addition to the unsaturated fatty acids such as isolation oleik, linoleic and linolenic acids, and B-complex vitamins such as niacin in red yeast rice can also be a solution to reduce cholesterol.

Clinical trials of supplements containing the extract of red yeast rice was also conducted in Indonesia by Aulia on 40 patients some time ago showed positive results.

“Within five days, the average levels of LDL (bad cholesterol) may fall 18.87 mg / dL and triglycerides decreased by 17.1 mg / dL,” said the former director of the Cardiovascular Center Harapan Kita .

Total cholesterol in the blood is less than ® 200 mg / dL. Regarding LDL levels below 100 mg / dl, and triglycerides below 150 mg / dl. Regarding the levels of HDL (good cholesterol) should be above 45 mg / dL.